(Video) In The Center of The Fire: A Modern History of the O.T.O. 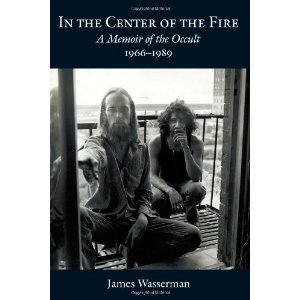 James Wasserman shares his experience in the development of the modern Thelemic movement and his enthusiasm for the spiritual teachings of Aleister Crowley.

This is the video record of a talk given on December 16, 2012 at Swirling Star Lodge of Ordo Templi Orientis. It includes numerous photos of influential figures in the development of Thelema as well as the early years of TAHUTI Lodge in New York City.

It's interesting to note that Crowley equates the Left Hand Path with Black Brotherhood; a Black Brother being, in his words, one who has reached the level of Adeptus Exemptus 7=4 (or an equivalent level of spiritual development by any other name) yet stops short when confronted with the ordeal of crossing the Abyss and completely relinquishing the ego, which, in Thelemic terms, is the pouring out of every last drop of ones own blood into the cup of Babalon who is considered to be a sacred whore because she denies no one, and yet she extracts a great price — the very blood of the adept and his ego-identity as an earthly individual. See the following information on this topic:


From: Magick Without Tears by Crowley -  http://hermetic.com/crowley/magick-without-tears/mwt_12.html


"It really is a little bewildering; the signpost "Right-hand Path", "Left-hand Path", seems rather indecipherable; and then, for such a long way, they look exactly alike.  At what point do they diverge?
Actually, the answers are fairly simple.
As far as the achievement or attainment is concerned, the two Paths are in fact identical.  In fact, one almost feels obliged to postulate some inmost falsity, completely impossible to detect, inherent at the very earliest stages.
For the decision which determines the catastrophe confronts only the Adeptus Exemptus 7○ = 4□. Until that grade is reached, and that very fully indeed, with all the buttons properly sewed on, one is not capable of understanding what is meant by the Abyss.  Unless "all you have and all you are" is identical with the Universe, its annihilation would leave a surplus."

"The about-to-be-Black Brother constantly restricts himself; he is satisfied with a very limited ideal; he is afraid of losing his individuality — reminds one of the "Nordic" twaddle about "race-pollution."

"In such cases [of becoming a Black Brother] the man's policy is of course to break off all relations with the Supernal Triad, and to replace it by inventing a false crown, Daäth.  To them Knowledge will be everything, and what is Knowledge but the very soul of Illusion?

Refusing thus the true nourishment of all his faculties, they lose their structural unity, and must be fortified by continuous doses of dope in anguished self-preservation.  Thus all its chemical equations become endothermic."


"The chief task for one who has achieved this [Knowledge and Conversation of Their Holy Guardian Angel] goes by the name of "crossing the abyss";completely relinquishing the ego. If the aspirant is unprepared, he will cling to the ego instead, becoming a Black Brother. Rather than becoming one with God, the Black Brother considers his ego to be god. According to Crowley, the Black Brother slowly disintegrates, while preying on others for his own self-aggrandisement."


"Aside from all the characteristics that can be used to describe it [being a Black Brother], the definition is really straightforward and simple: A Black Brother is an Adeptus Exemptus 7=4 who resists and pulls back from the Ordeal of the Abyss when it is presented.

The main psychological characteristic is a fear of death. Now, a fear of death is quite reasonable and appropriate at a much earlier stage of development when one still believes that one's existence is finite and tied to one's physical body. It isn't appropriate, though, for a 7=4."

"To monotheistic religions, this experience [the dissolving of the boundaries which define the self] is the union with God. To the Left Hand Path adept, it means to be "devoured by the Devil and he seeks deliberately to avoid it."

"In the Right Hand Path philosophy, man cannot oppose God, the higher force. The Left Hand Path traditions do not share this conviction."


See also, my post on the Speech in The Silence podcast segment with Dr. David Shoemaker as he discusses the ego, The Great Work and the concept that it is not the Self which we seek to give up, but rather it's the limited perspective of self identification *solely* with the ego.  - http://unusmundus-melie.blogspot.com/2011/11/podcast-speech-in-silence-episode-24.html
at 9:57 AM No comments: Links to this post